” One of my favorite subjects to try to resolve as sculpture is that of springboard and high board diving. This was my sport when young, through which I met my wife who also a diver. The problems posed by this subject are those of expressing movement and grace, athleticism and style, as well as trying to convey the sensation of flight. This is one of the most exhilarating aspects of diving, those rare moments when you feel no pull of gravity and are flying.

I have been playing with bundle of problems for many years and I made my first attempt in the 1960’s when living and working as a member of the Digswell Arts Trust, in Hertfordshire. It was after about two or three years of trying different devices, to help create the illusion of flight, that I realized that the old diving manuals we used to learn the formation and performance of complex diving movements were also the key to my sculptures.

My divers therefore do not seek to create an easy path to imparting the sensation of movement, by for instance, being off balance, and seeming to intimidate the viewer. I have set myself rules prompted by my studies of the morays of traditional sculptural which, to some degree, are also embodied in the diving manual diagrams. I believe therefore that the forms of sculpture, in which balance and the disposition of form and weight about a stable centre, contained within its own base area, provide the best framework to work to. This achieves a good solid grounding and stable physical presence, whilst allowing freedom to experiment in the narrative depiction of movement.

The task is to imply a continuous state of moving from one position to another, so that even a figure that is expressing stillness alludes to its previous position or sequence of movements as well as to those to come. The objective is not to freeze an action but encapsulate enough of its typical sequences of movements. 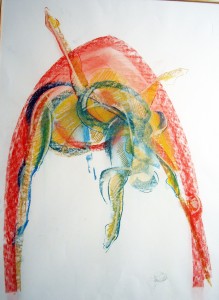 This means paying attention to the physical personality of the kind of athlete shown, remembering that bodies develop according to use exercise and environment. A good knowledge of working anatomy enables me to take liberties and using a specific individual sometimes helps with the depiction of particular idiosyncratic movement.

The objective after all is to make a sculpture, an equivalent to, not a duplicate of the living person. In recent diving sculpture I have managed to find solutions that please me very much. One particular case is the piece I made for a private swimming pool where I made a six foot high bronze of a male and female diver – SHERWOOD DIVERS, shown in the position for a head first entries and placed in the water with the hands just touching the surface. This gives a feeling of weightlessness to the heavy bronze it also creates very good reflections and depth of colour “. JOHN W. MILLS 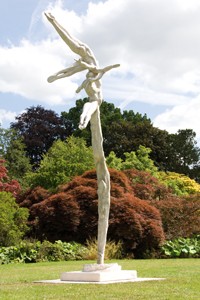