Gore trained at the Slade from 1896–9, where he knew Harold Gilman. In 1902 he visited Madrid with Wyndham Lewis, another Slade contemporary. Subsequently, he successfully proposed for the Camden Town Group, later a source of friction. Gore was introduced to Sickert in Dieppe in 1904 by Albert Rutherston, because of his enthusiastic account of the younger artists in London. He was instrumental in Sickert’s s return to England to work after a virtual absence of a decade.

He was a founder member of the Camden Town Group and elected its President. In 1911 he was given his only lifetime solo show at the Chenil Gallery in Chelsea. Gore and Sickert were on close terms, and they, on occasion, painted side by side in Mornington Crescent. But Gore moved away from pure impressionism towards a more rigorously modern style, and he both tolerated and encouraged truly advanced art.

In 1912 he organized the new modern decorations for The Cave of the Golden Calf nightclub, drafting in Camden Town Group members Gilman, Ginner, and Lewis, and also Jacob Epstein and Eric Gill. He was in Roger Fry’s Second Post-Impressionist exhibition in 1912, and in 1913 Gore organised the exhibition of ‘English Post-Impressionists, Cubists and Others’ that brought together the varied factions of the London avant-garde.

The summer and autumn of 1912 spent in Gilman’s house at Letchworth. During this period carried out a lot of experiments and changes that followed; he produced some of his most advanced work. In 1913 he and his young family moved to Richmond. Painting in all weather in Richmond Park, Gore succumbed to pneumonia in March 1914.

Below: Titled: The Cinder Path, in TATE Britain Collection purchase in 1975.

The Cinder Path is part of the walkway at the edge of Letchworth Garden City, a scene overlooking the unwinding landscape in the distance towards Hitchin. (Take a visit into the past and enjoying The Garden City’s Greenway Walk  click the link for a map. Find the view and walk along the Cinder Path that inspired Spencer Gores for his rural landscape painting here captured the light, as an impressionist painter working with complete control, balancing the finest use of his brighter colours palette, layers of greens along his deep blue footpath, hedges and trees with blue violet sky and soft clouds in the distance. Brilliant use of his brush stroke technique finally creating a sense of calmness to the overall view in the painting completed in 1912. 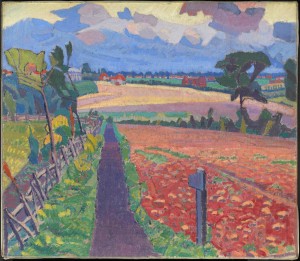