Welcome to the ICAS Ceramic Art collection! Learn about the art and artists whose works make up the collection of Ceramic Art. Search by artist or object, or follow our themes or exhibitions within our selection, or create your list to share. We updated regularly, do revisit us to follow the developments.

“Art is your emotions flowing in a river of imagination”

“The purpose of art is washing the dust of daily life off our souls”. – Pablo Picasso

“It is the supreme art of the teacher to awaken joy in creative expression and knowledge”. – Albert Einstein 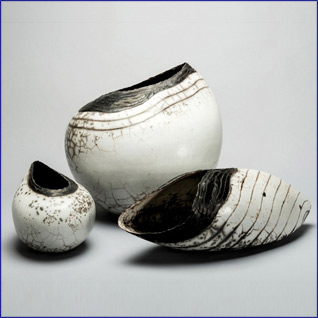 The history of ceramics begins with earthenware. Thousands of years ago, humans learned how to make earthenware vessels by kneading, forming, and firing clay. Before this discovery, the only other human-made items were stone tools made by chipping rocks? In this sense, earthenware could be called “the root of all industrial products.” After the Stone Age, countless advancement was made over the millennia before Fine Ceramics appeared as we know them today.

There is a long history of ceramic art in almost all developed cultures, and often ceramic objects are all the artistic evidence left from vanished civilizations, like that of the Nok in Africa over 2,000 years ago. Cultures especially noted for ceramics, include the Chinese, Cretan, Greek, Persian, Mayan, Japanese, and Korean cultures, as well as the modern Western cultures.

Elements of ceramic art, have been placed at different times, are the shape of the object, its decoration by painting, carving and other methods, and the glazing found on most ceramics.

From the 8th to 18th centuries, glazed ceramics was famous in Islamic art, usually in the form of elaborate pottery, developing on vigorous Persian and Egyptian pre-Islamic traditions in particular. The Islamic potters developed Tin-opacified glazing, the first examples found as blue-painted ware in Basra, dating from about the 8th century. The Islamic world had contact with China and increasingly adapted many Chinese decorative motifs. Persian wares gradually relaxed Islamic restrictions on the figurative ornament, and painted allegorical scenes became very important.

The people in North, Central, and South America continents had a wide variety of pottery traditions before Europeans arrived. The oldest ceramics known in the Americas — made from 5,000 to 6,000 years ago — are found in the Andean region, along the Pacific coast of Ecuador at Valdivia and Puerto Hormiga, and in the San Jacinto Valley of Colombia; objects from 3,800 to 4,000 years old discovered in Peru. Some archaeologists believe that ceramics know-how found its way by sea to Mesoamerica, the second great cradle of civilization in the Americas.

The earliest Japanese pottery was around the 11th millennium BC. Before Jōmon ware emerged in the 6th millennium BC and the more understandable Yayoi style in about the 4th century BC, this early pottery was soft earthenware, fired at low temperatures. The potter’s wheel and a kiln capable of reaching higher temperatures and firing stoneware appeared in the 3rd or 4th centuries AD, probably brought by southern Korean potters. In the 8th century, official kilns in Japan produced pure, green lead-glazed wares.

Japanese ceramic history records distinguished many potter names, and some were artist-potters, e.g., Honami Koetsu, Ogata Kenzan, and Aoki Mokubei. Japanese anonymous kilns also have flourished through the ages, and their influence weighs with that of the potters. Another characteristically Japanese aspect of the art is the continuing popularity of unglazed high-fired stoneware even after porcelain became popular. Since the 4th century, Japanese pottery and porcelain were often influenced by the Chinese and Korean, sometimes through Korean pottery.

Pottery in the Indian subcontinent has an ancient history and is one of the most tangible and iconic elements of regional art. Evidence of pottery was in the early settlements of Mehrgarh from the Indus Valley Civilization. Today, it is a cultural art that is still practiced extensively in India and Pakistan.

Today, pottery thrives as an art form in India, and it is slowly gaining awareness as functional items as well. Various platforms, including potters’ markets and online pottery boutiques, have contributed to this trend. 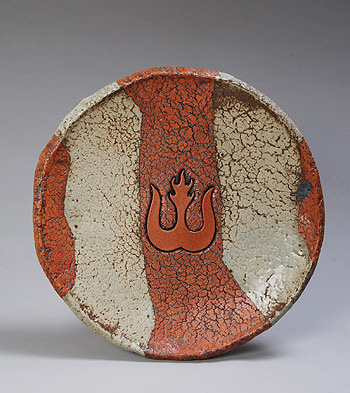 India has a great and ancient tradition of pottery making. The origin of pottery in India can be traced back to the neolithic age, with coarse handmade pottery – bowls, jars, vessels – in various colours such as red, orange, brown, black, and cream. The real beginning of Indian pottery is with the Indus Valley Civilization. There is proof of pottery constructed in two ways, handmade and wheel-made. Harappan and Mohanjodaro cultures heralded the age of wheel-made pottery, characterized by well-burnt black painted red wares.

We proudly present our ICAS gallery artists selection of ceramics art included  in our current exhibition, kindly contact our gallery to arrange a viewing by appointment.