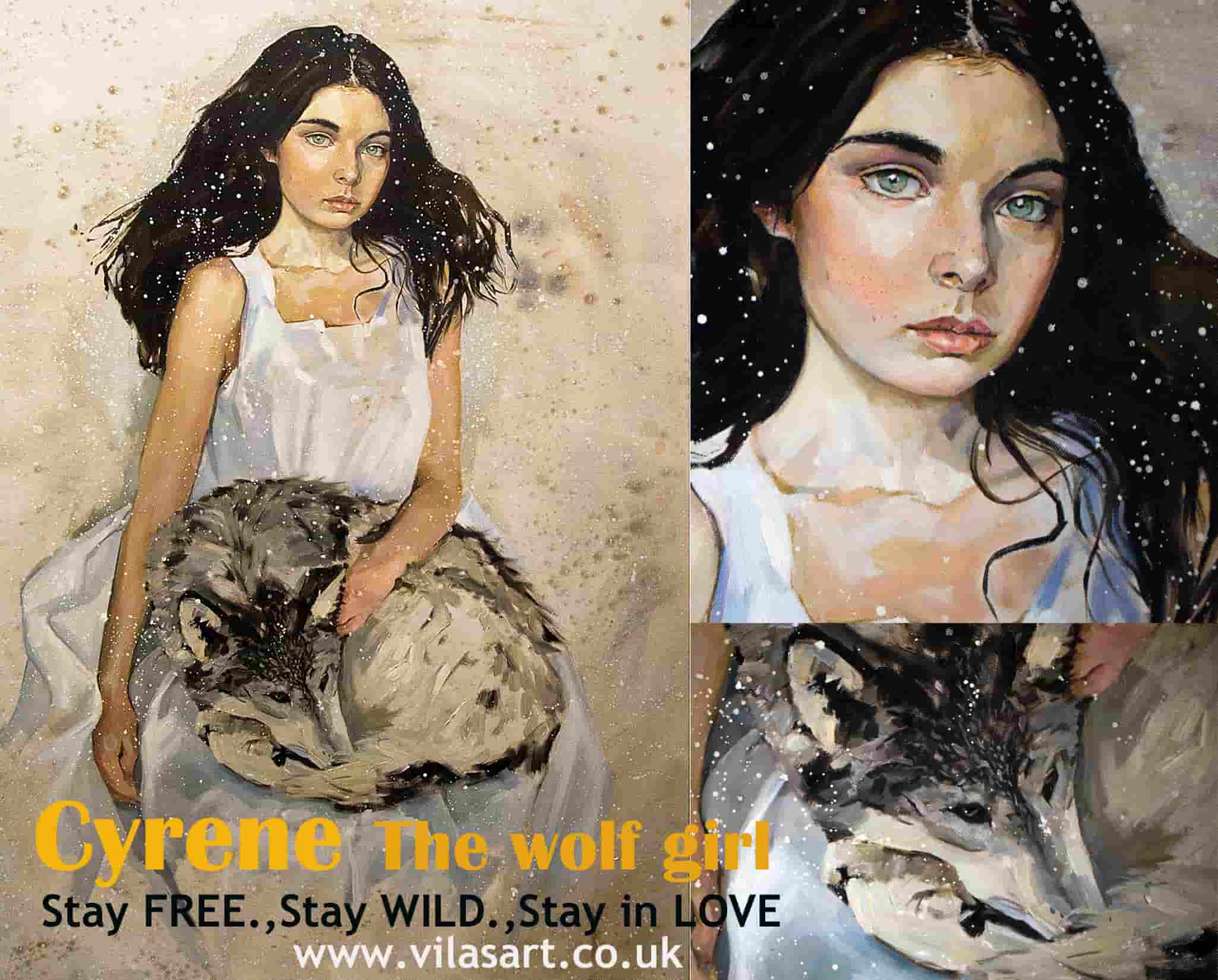 ONCE UPON A TIME –

We unlock the stories behind the collection of paintings in this Summer art exhibition, to celebrate our 34th anniversary.., Discover the World of Myths & legends .., their stories and the meanings..,

CYRENE – THE WOLF GIRL
Stay free, stay wild, stay in love.
Few animals capture people’s imagination quite like the wolf. For thousands of years, the wolf has fascinated us, frightened us, and played with our imagination. The power of the wolf brings forth instinct, intelligence, appetite for freedom, and awareness of the importance of social connections..
The wolf features prominently in myths and legends from many North American and European cultures, as well as from other places around the world.
We welcome OLEKSII GNIEVYSHEV German contemporary figurative painter originally from the heart of Ukraine, Kiev to join our list of ICAS gallery artists with his  beautiful mesmerising realism story telling paintings of the myths & legends  that times forgotten.

We now taking enquiries for special signed limited editions prints. email us your details to reserve a copy.

We  trace the many versions of stories that captures the pure relationship of innocence’s that still remains between Cyrene the young girl,  her friendship, love and over time the connection with the wolf.

Cyrene was one of the most beautiful figures in Greek mythology, so beautiful indeed that Apollo would take Cyrene as his lover.

Cyrene is normally said to have been a mortal princess, daughter of King Hypseus, king of the Lapiths, and an unnamed nymph. Cyrene had two named sisters, Themisto and Astyaguia.

Hypseus was a son of the Potamoi Peneus and Creusa, but some would say that Cyrene was not a daughter of Hypseus but was his sister, having been born to Peneus. This would make Cyrene not a mortal princess, but a Naiad nymph.

Certainly Cyrene had the beauty of the nymphs, with some saying Cyrene was a rival for the Charites in looks. In many ways though, Cyrene was more like Artemis, for Cyrene became a huntress of some note, and one, who like the goddess, was protective of her virtue.

Cyrene’s skill as a huntress ensured that she became the chief protector of her father’s cattle and sheep, and it was in this role that she was chanced upon by the Greek god Apollo. As a lion attacked the cattle of Hypseus, Cyrene did not kill it with a javelin or arrow, but instead wrestled with it, until it succumbed. Apollo was greatly taken by the strength and daring of Cyrene, and it was said by some that Apollo even deigned to ask the centaur Chiron about the woman he had observed.

Apollo slept with Cyrene in form of a wolf according to the late Roman writer Servius in his commentary on the Aeneid (377), although other sources don’t mention this.

Than there was the fairy tales world of Little Red Riding Hood– This is a story about the never-ending fight between good and evil, a story about greed and hope, and a story about responsibilities and second chances..,

Finally I refer to some of latest quotes from Women Who Run With the Wolves:

Myths and Stories of the Wild Woman Archetype by Clarissa Pinkola Estés,

“I hope you will go out and let stories, that is life, happen to you, and that you will work with these stories… water them with your blood and tears and your laughter till they bloom, till you yourself burst into bloom.”

“Sometimes the one who is running from the Life/Death/Life nature insists on thinking of love as a boon only. Yet love in its fullest form is a series of deaths and rebirths. We let go of one phase, one aspect of love, and enter another. Passion dies and is brought back. Pain is chased away and surfaces another time. To love means to embrace and at the same time to withstand many endings, and many many beginnings- all in the same relationship.”

Be wild; that is how to clear the river. The river does not flow in polluted, we manage that. The river does not dry up, we block it. If we want to allow it its freedom, we have to allow our ideational lives to be let loose, to stream, letting anything come, initially censoring nothing. That is creative life. It is made up of divine paradox. To create one must be willing to be stone stupid, to sit upon a throne on top of a jackass and spill rubies from one’s mouth. Then the river will flow, then we can stand in the stream of it raining down.”

“In mythos and fairy tales, deities and other great spirits test the hearts of humans by showing up in various forms that disguise their divinity. They show up in robes, rags, silver sashes, or with muddy feet. They show up with skin dark as old wood, or in scales made of rose petal, as a frail child, as a lime-yellow old woman, as a man who cannot speak, or as an animal who can. The great powers are testing to see if humans have yet learned to recognize the greatness of soul in all its varying forms.”

What’s your preferred story of The Girl and Wolf ?.., we leave it to your own imagination to enjoy our exhibition and feel the full experiences to connect with the truth of CYRENE…,