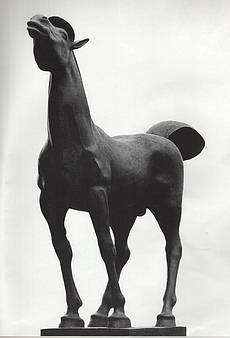 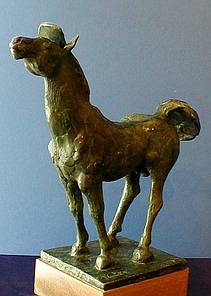 ” The Marquette on show here is a study for both of the large bronzes mentioned below, both of which are over nine feet high and they are all based on my studies of Chinese Tang terracotta horses in the British Museum and in other collection in France and the USA. What I like is the constant reference to sculpture and sculptural solution to observed facts that is so embodied in the Tang horse. They are anatomically correct without being mere copies of actual beasts. In this respect they are similar to the famous four horses of St Marks in Venice which of course Greek or Roman. It is believed that they could be the horse that pulled the Quadriga of the Delphi Charioteer. My admiration for this kind of informed sculptures prompts me to use them as an influence. As with the real animal it is not a question of merely copying but making sculpture that shows where you have been and what you have seen. I have made two version of this subject CHINESE DYNAMIC and CHINESE REFERENCE. Dynamic is in the Harlow collection in Essex and Reference is in a private collection in Oxfordshire”.

‘Horses were admired in China for their speed and endurance, and were indispensable in warfare, hunting and the aristocratic pastime of polo.

According to Choi, there are three main types: the forest horse, which didn’t exist in China and therefore was not recreated in terracotta; the Mongolian Asian wild horse, a rough, work animal with short legs and a bigger head; and the desert horse from central and western Asia, prized for its leaner form, longer body and legs, and smaller head.

‘In 1996, archaeological research and DNA tests proved the desert horse was introduced to China by the nomadic Tocharian tribes more than 4,000 years ago, and cross-bred with the Mongolian wild horse,’ says Choi.

Terracotta horses bear characteristics of both types. The earliest Chinese horse figure dates back to the Stone Age. ‘It looks like a dog,’ says Choi.

However, he says, ‘the earliest examples for burial are from the end of the Warring States period [475 to 221 BC]. Burial figures were made for the tombs of the imperial, noble and wealthy.

Bronze, wood and terracotta were all used. ‘Around the Qin dynasty [221 to 206 BC] bronze was needed for weaponry, so they started using more terracotta.’ The types of terracotta, which include red, grey (black) or white, can be traced to specific regions and dynasties.
The most sought after are from the Tang dynasty (618 to 907 AD). ‘They are more important because they reached a high level of culture and art. Horses of the Han dynasty [206 BC to AD220] are the next most popular.’ Tang horses are rarer, he says, because they made fewer. ‘A Han emperor would have about 500 horses, while in the Tang dynasty tombs would have as few as two.’

Tang horses are known for their sculptural grace and elegance. ‘The head, trunk and legs of each horse were moulded separately, then joined before the painting of details such as the mane and trappings, which accounts for slight discrepancies in pose and surface decoration,’ Choi says.
During this period, red and brown pigment over a high-fired buff pottery body were used to accentuate details such as knotted saddlecloths, bells, medallions, manes and forelocks. The era is also famous for its Sancai polychrome pottery, referring to three colours: green, yellow and brown.
There is a dizzying number of classifications and categories associated with each dynasty and geography. Poise and alertness are also admired. Choi says the standard positions include prancing, dancing (only for the emperor’s birthday), and working. ‘Open mouths fetch higher prices than closed mouths. Generally, the rarer the pose, such as a horse drinking water, the more valuable.’